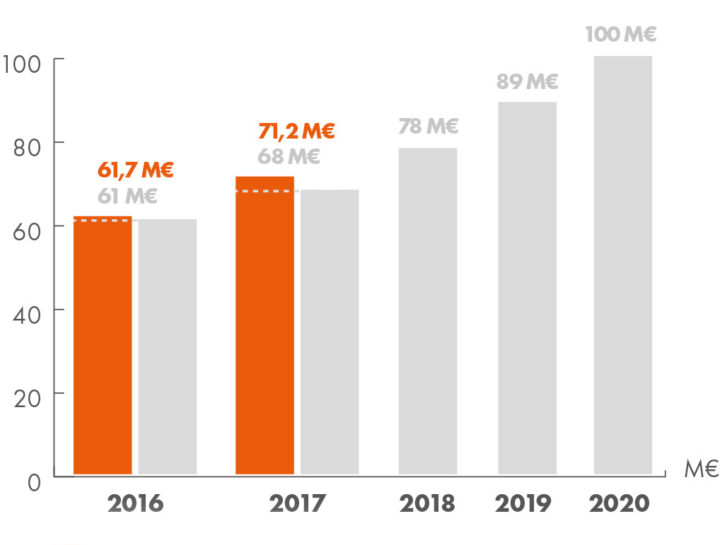 Granlund Group, a specialist in building services design, consulting and software, exceeded its growth targets in 2017. The Group is making systematic progress towards its 2020 goal of reaching EUR 100 million in annual net sales.

The Group’s operating profit was EUR 8.3 million (EUR 7.1 million). The Group continued to make significant investments in innovation at EUR 4.4 million, or about 6% of consolidated net sales. Granlund operates in 20 locations in Finland and has international offices in Shanghai, Dubai, Malmö and Sheffield. The Group had 808 employees at year end, an increase of 102 from the previous year.

The Group’s solvency and liquidity have remained good. Return on equity was 30% (29.2%) and the equity ratio was 49.6% (49.8%). The net sales and operating profit of all of the Group companies was at least satisfactory – in some cases, these key indicators showed excellent results. All of Granlund’s employees are included in the profit-related bonus scheme, under which EUR 4.1 million was paid out. “Our experts make Granlund, and we want to reward the entire team annually for achieving strong results”, says CEO Pekka Metsi.

“Companies in the construction and property industries had a very good year in 2017. Variations on alliance models and cooperative project management contracts increased their market share, and digitality has become an important element in the industry. The key themes of the year included open data, the extensive utilisation of information modelling and artificial intelligence,” Pekka Metsi explains.

In Finland Granlund remains the market leader in building services and large construction projects now account for a higher share of the Group’s order book than ever before. Major projects in the Helsinki metropolitan area include YIT’s Tripla project, the West Metro and the Helsinki Airport development project. There are also several significant hospital projects underway across Finland, including the New Children’s Hospital, the HUS Siltasairaala Hospital, Vaasa Central Hospital and the Kuopio University Hospital New Heart project.

In the consulting business, the Group’s order book grew by 15% year-on-year. Demand was particularly strong for energy and property consulting services and workshop activities, and the interest in well-being services grew. In the software business, Granlund Manager increased its market share in Finland to approximately 40% in the commercial properties segment. The mobile application version of the software was launched and internationalisation continued, with a focus on the Middle Eastern and Chinese markets.  Data centre design and renovation also saw strong growth.

Granlund’s strategy from the present until 2020 is focused on promoting well-being, user-driven practices and new solutions. New initiatives in 2017 included establishing digital property services, launching the Premises to Promote Well-being concept for properties and the virtual property, which is the first solution to introduce information modelling to property management. The smart building trend is closely linked to Granlund’s operations, with the role of building systems in projects set to grow as the use of digital solutions becomes increasingly common.