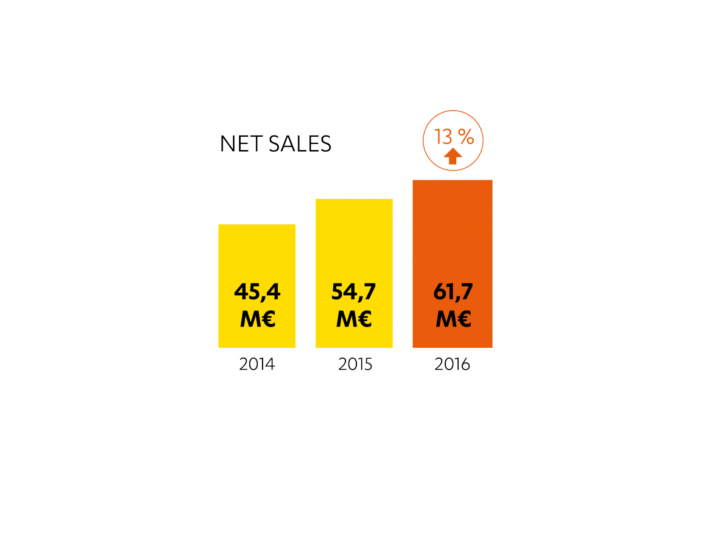 The group's net sales increased by 13 per cent

Granlund Group, a business focusing on designing building services, consulting and software, continued to grow steadily in 2016. The Group’s net sales increased by 13 per cent year-on-year to approximately EUR 62 million (EUR 54.7 million). The Group’s operating profit increased from EUR 6.8 million to EUR 7.1 million. Investment in innovation and development activities will continue to be strong, remaining at approximately 7 per cent of the Group’s net sales.

Granlund Group’s solvency and liquidity have remained good. In 2016, return on equity was 29.2 per cent (38.0 per cent) and the equity ratio was49.8 per cent (49.2 per cent). The net sales and operating profit of all of the Group’s companies was at least satisfactory – in some cases these key indicators showed excellent results. All of Granlund’s employees are included in the profit-related bonus scheme, under which EUR 2.7 million was paid out.

Granlund’s market share in building services design remained at the previous year’s level, and is particularly strong in hospital, infrastructure and commercial building projects. Major projects account for about one third of Granlund’s design work. Key projects include the HUS Siltasairaala Hospital, YIT’s Tripla and the Helsinki Airport development programme.

Consulting has grown rapidly and succeeded in establishing itself on the market. The subsidiary Granlund Consulting Oy concentrates on property management, energy and environmental consulting as well as cost calculation. It stands out in the market in energy optimisation, as well as in developing the working practises of construction business and as the market leader of TEDD and Due diligence services.

In the international software business, offices were established in the promising markets in the Middle East and China. The regions have a lot of old building stock needing maintenance, and the energy conservation possibilities are interesting. As oil prices have fallen, savings are also needed in property costs.

Granlund launched its new 2020 strategy and it will invest in improving the built environment and the well-being of users of properties. Good indoor environments, energy efficiency, functional technical systems and supporting digital services form the core of the business. The Group’s internationalisation is being led by the software business.