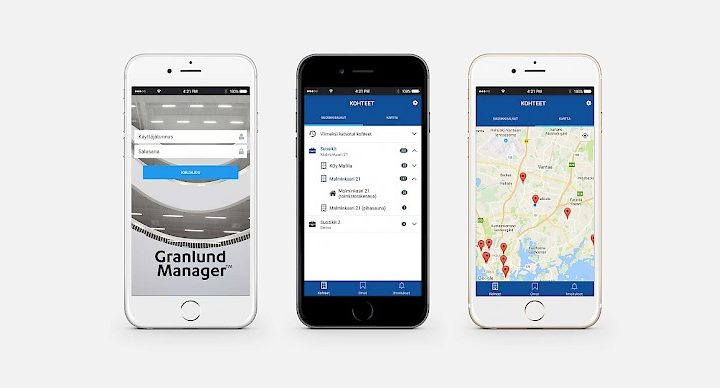 Granlund Manager Mobile was released during summer 2017 for Android. Mobile app for iOS is released at the end of the year 2017.

Granlund Manager Mobile focuses on an intuitive user experience. It enables to maintain properties regardless of their location and has received positive feedback from the users.

With the mobile application, essential information about the needs of property maintenance is always passed along, reaches the right persons and frees up time for actual maintenance work.

”The benefits of the application become apparent especially when maintaining large and scattered properties,” says Jack Westrén-Doll, the director of Granlund’s Software department. ”There is no need to visit the sites in a specific order. They can be visited according to the degree of urgency. The mobile application also enhances the property managers’ and owners’ work. For example, more effective approval procedures result in improved service quality for the users of the premises.”

The application also works in the blind area, and real-time notifications can be sent to the mobile phone.

”The user does not need to retrieve information separately as push messages are received automatically,” states Westrén-Doll. ”Furthermore, thanks to the offline support, efficient mobile work is also possible in the blind sector. For example, system faults can be recorded already in the basement and the information is loaded from the telephone to the server in an area with better reception.”

Excellent user experiences – Users were involved in the development of the new iOS app early on.

Granlund Manager Mobile will be released for the iOS platform at the end of 2017. For Android devices, the app has been available since the summer of 2017.

“Based on our positive experiences with the Android version and the excellent feedback provided by customers, we decided to also continue development on an iOS version. Of course, the market shares of smartphones in Finland also played a role,” says Technology Director Kenneth Lassila.

In most countries, Android dominates the market (85%), but in Finland, the user volumes of Apple devices are above the average.

“Here in Finland, Apple’s mobile devices account for about one-third, or 28 percent, of the market, while Android’s share is lower than elsewhere, about 68 percent. Apple is also widely used by many of our customers, and we want to provide them with equally excellent service,” Lassila continues.

The new version has already been previewed in-house.

“The first estimates of Apple testers have been overwhelmingly positive. I don’t think we should emphasize the differences between the two ecosystems, as both have their loyal supporters. However, it is understandable that iOS users are excited about using Granlund Manager on a familiar platform,” Lassila notes.

Users were involved in the development of the app at an early stage. During the process, usability was ensured through several interviews and pilot tests.

“The result is an intuitive, powerful, and easy-to-use tool. We are developing an industry-leading product together with our customers.”

Granlund Manager Mobile supports a modern mobile property maintenance model, offering new features such as push notifications, maps, and working offline. They help mobile personnel perform their tasks with maximum flexibility and efficiency without unnecessary intermediate steps or transitions. In addition, overviews of different processes are available in the form of intelligible diagrams.

The new iOS version will be released before the end of the year. To learn more about the release, please visit our website and follow our newsletters.

The features of Granlund Manager Mobile for iOS include: